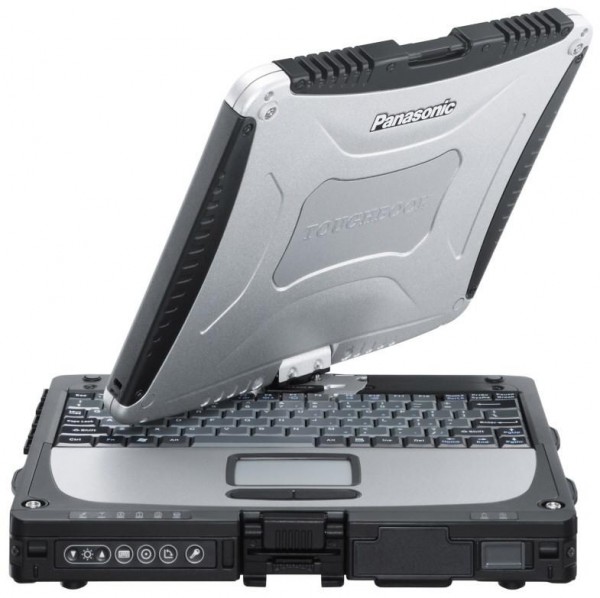 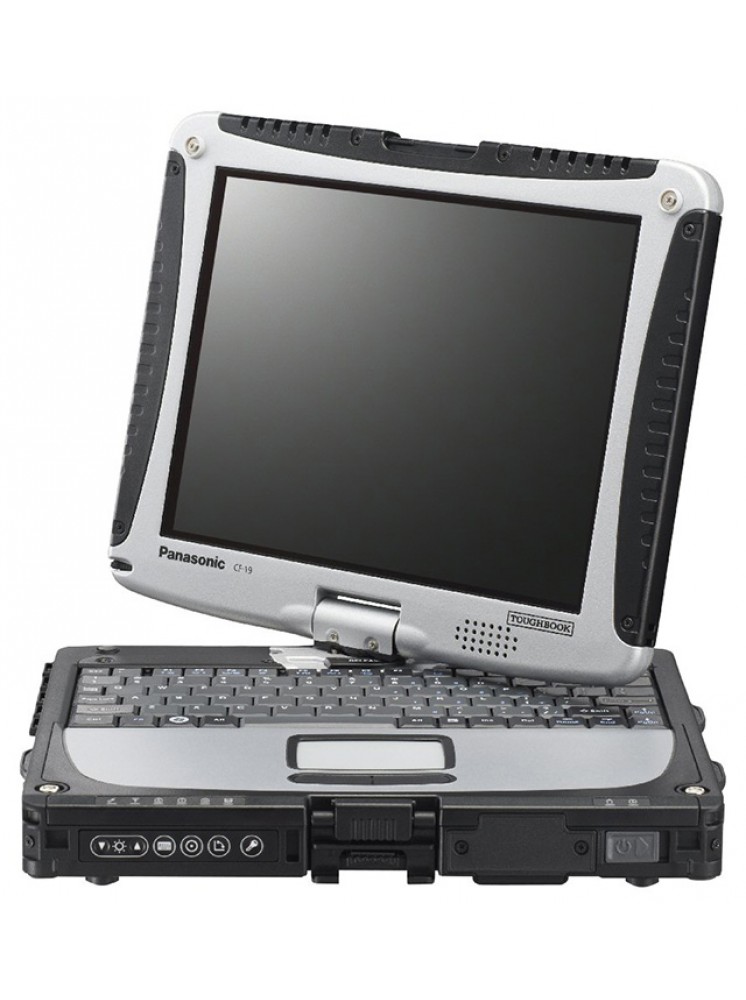 Yet another big update of Panasonic”s Tablet PC convertible
(by Conrad H. Blickenstorfer)

Update September 2012: On September 4, 2012, Panasonic announced yet another technology update to its Toughbook 19. The hardware platform itself, mature to the max, hardly needed improvement, but Intel”s rapid flurry of Core processor familiy announcements likely forced Panasonic”s hand. So the latest revision of the CF-19 now goes from the second to the third generation of Intel Core processors, one that slightly boosts processing performance, greatly boosts graphics performance, and also improves power efficiency. Additional benefits of the move to the Intel 3rd gen Core chips include the much faster USB 3.0, a switch to Interlink”s VersaPad for increased touchpad responsiveness, expanded storage, and a variety of ancillary improvements.

Update June 2011: Panasonic”s venerable convertible notebook has been updated once again, and this time the enhancements are quite substantial. Substantial enough, in fact, that Panasonic might as well have called this the CF-20. 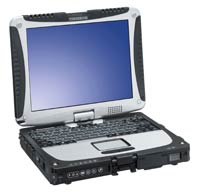 After all, they changed from CF-18 to CF-19 for less. Anyway, this latest CF-19, now apparently called the Mark 5, benefits from a massive performance upgrade in the form of a standard voltage 2.5GHz Intel Core i5-2520M processor, a very, very boost from the 1.06GHz ultra low voltage Core 2 Duo U7500 in the last CF-19 we tested, and also from the 1.2GHz Core 2 Duo SU9300 the model was upgraded to a couple of years ago. So this latest Toughbook 19 should be a veritable rocket compared to its predecessors.

Another big change is in the display. While the prior model had a 10.4-inch transmissive display made sunlight-viewable via a combination of Panasonic”s "CircuLumin" optical treatment and a super-bright 1,000 not backlight, the Mark 5 now has a 10.1-inch transflective display that apparently adds a reflective layer, obliterating the need for a super-strong backlight for outdoors, but still working in conjunction with the CircuLumin display treatment. As is the case with the U1 Ultra, Panasonic specs this display as having "up to 6000 nit in direct sunlight." This sounds quite a bit like Pixel Qi”s technology, with which the CF-19 shares the not common 10.1-inch size, but the Pixel Qi display only has WSVGA (1024 x 600) resolution, and not the Pana”s full 1024 x 768 XGA.

The latest model also uses much faster DDR3 RAM, has larger and faster disks (320GB HD or 128/256GB SSD), faster Wifi (Centrino Advanced-N 6205 and embedded 4G LTE later in 2011), as well as a high-capacity SDHX card slot. Ruggedness also has steadily been creeping upward, with sealing now at the IP65 level (IP54 before) and the drop spec doubled (!) from three to six feet. That is impressive.

The paragraphs below describe an earlier version of the CF-19 and its updates. The specs have changed, but everything else still applies s the basic concept really hasn”t changed since its inception almost a decade ago. 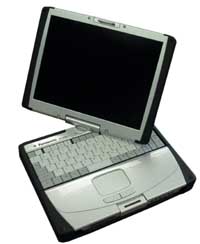 Note: In January 2009, Panasonic again updated the CF-19F to the CF-19K version. One major change was switching from a 1.06GHz Intel Core 2 Duo U7500 to a 1.2GHz Core 2 Duo SU9300 with vPro(TM) technology, potentially enhancing security. Standard memory doubled to 2GB and the standard hard disk capacity also doubled to 160GB (SSDs are now optionally available as well). The CF19 now has a 1,000 nit LCD with circular polarization technology and anti-glare and anti-reflective screen treatments to enhance screen viewability, further improving in-field usability for mobile workers. This is big news as the older displays were in th 500 nits range. Battery life is said to be 40% longer (up to ten hours now. even though the faster replacement processor has the same 10 watt Thermal Design Power as the older chip).

Note: In early 2008, Panasonic slightly updated the CF-19 to the CF-19F version. The major change was switching from an Intel Core Duo U2400 to a Core 2 Duo U7500. Both are very low voltage chips running at 1.06GHz with virtually identical power consumption.

The Toughbook CF-19 is Panasonic”s sole Tablet PC offering. It will always be dear to me because Panasonic showed me the original prototype of what would become the CF-18 in Osaka during a 2002 factory tour, and we discussed its inception and design. I was impressed that the Matsushita engineers seemed genuinely interested in my opinion.

The CF-19 is a technologically updated version of the original CF-18, just as the larger CF-30 is the latest version of the CF-27/28/29 line. Both updates were introduced in October of 2006 and have been incrementally improved since. The overall design of this very compact machine did not need to be changed as there is nothing to improve, and this also makes the CF-19 backward compatible with existing vehicle mount solutions -- an important consideration for many Panasonic customers. The photo above does not really show how compact this machine is. With a footprint of 10.7 x 8.5 inches and a thickness of under two inches this is one ruggedized machine that does not take up a lot of space. Even more impressive is that the CF-19 weighs just over five pounds despite its heavy duty construction and extensive protection.

The CF-19”s design is that of a standard Tablet PC convertible. It can be used as a notebook, or the screen can be rotated and then folded down flat onto the keyboard, LCD facing up. Panasonic offers both a touchscreen version that runs standard Windows XP and a Tablet PC version with an active Wacom digitizer and the XP Tablet PC Edition. Both have a 10.4-inch transmissive XGA display with low reflection screen coating with a circular polarizer. The Tablet PC version is a bit brighter with a 550 Nit rating compared to the 470 Nit of the touch screen model.

The CF-18 version was last available with a 1.1GHz Intel Pentium M 733 processor, and the first generation CF-19 models were powered by a 1.06GHz Core Duo U2400 CPU. The CF-19F switched to a Core 2 Duo U7500 running at the same speed and having almost the same DTP (Thermal Design Power) rating (10 watts versus the older chip”s 9 watts). This is a machine meant to last through as much as a full shift rather than winning speed contests. Standard RAM is now 1GB of DDR2 PC2-4200 and can be expanded up to 4GB (2GB in the Japanese spec). The shock-mounted, removable disk is 80GB. The CF-19 isn”t large enough for an optical drive, so if you need one it has to be external.

In the connectivity department, the CF-19 rates very high. Two USB ports, Firewire, serial for legacy peripherals, modem, LAN (only 10/100 though), audio, video, port replicator and two external antennna jacks. All ports are covered or sealed. Wireless capabilities include an Intel WiFiLink 4965AGN module and Bluetooth 2.0 with enhanced data rate, as well as optional integrated radios Cingular/AT&T UMTS/HSDPA and the EV-DO Verizon and Sprint networks. GPS is also available, as is a fingerprint scanner. The CF-19 does have a Trusted Platform Module security chip, but not the CF-30”s SmartCard reader option.

Like all Toughbooks, the CF-19 is built to last and take some punishment. It has a full magnesium case, a moisture and dust resistant keyboard (sadly still not full-scale!) and enough sealing to give it an IP54 rating. It”s MIL-STD-810F tested, but the specs are somewhat unclear as to what degree (the US and Japanese websites state different data). We rate it somewhere between the often fluid "rugged" and "semi-rugged" designation.

Overall, the CF-19 is a highly configurable, compact and modern mobile computer that fits almost anywhere. It weighs very little, yet has a battery powerful enough to last, according to Panasonic, almost eight hours. The Tablet PC convertible design adds flexibility, as do the various wireless options available